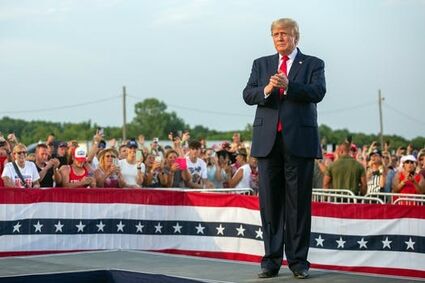 Former President Donald Trump is cheered at a rally in Mendon, Ill., on June 25. Republicans are bracing for the prospect of Trump declaring an unusually early presidential bid.

Republicans are bracing for Donald J. Trump to announce an unusually early bid for the White House, a move designed in part to shield the former president from a stream of damaging revelations emerging from investigations into his attempts to cling to power after losing the 2020 election.

While many Republicans would welcome Trump's entry into the race, his move would also exacerbate persistent divisions over whether the former president is the party's best hope to win back the White House. The party is also divided over whether his candidacy would be an unnecessary distraction from midterm elections or even a direct threat to democracy.

Trump has long hinted at a third consecutive White House bid and has campaigned for much of the past year. He has accelerated his planning in recent weeks just as a pair of investigations have intensified and congressional testimony has revealed new details about Trump's indifference to the threat of violence on Jan. 6 and his refusal to act to stop an insurrection.