Suspect in connection with a mass shooting at July 4th parade in Highland Park, Illinois, has been taken into custody 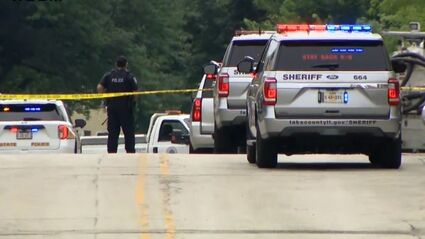 A large police presence responded to a shooting at a July 4th parade in Highland Park, Illinois.

Highland Park, Illinois CNN - Robert E. Crimo III, the suspect in a mass shooting at a parade that left six dead and sent more than two dozen people to hospitals, has been taken into custody near Lake Forest, Illinois, authorities said during a brief news conference Monday night.

Authorities said Crimo was spotted by a North Chicago officer who attempted a traffic stop. Crimo led officers on a brief chase before being stopped. He was taken into custody without incident and will be transferred to the police department in Highland Park, where the deadly shooting occurred earlier Monday.

Crimo has not been named as a suspect. When asked, authorities said he remains a "person of interest" while they investigate and positively connect him to the scene.