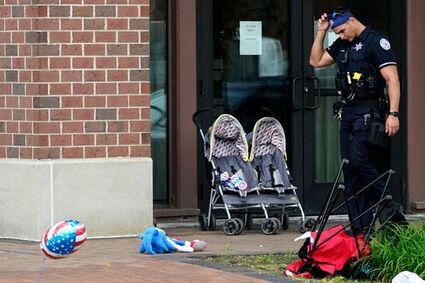 A police officer reacts as he walks in downtown Highland Park, a suburb of Chicago, Monday, July 4, 2022, where a mass shooting took place at a Highland Park Fourth of July parade. (AP Photo/Nam Y. Huh)

HIGHLAND PARK, Ill. - A gunman on a rooftop opened fire on an Independence Day parade in suburban Chicago on Monday, killing at least six people, wounding at least 30 and sending hundreds of marchers, parents with strollers and children on bicycles fleeing in terror, police said. The suspect remained on the loose hours later as authorities scoured the area and police surrounded a home listed as his possible address.

Highland Park Police Chief Lou Jogmen said Monday afternoon that police have identified 22-year-old Robert E. Crimo III as a person of interest and cautioned he should be considered armed and dangerous. Police declined to answer questions about how they identified Crimo. Authorities described his car as a silver Honda Fit with an Illinois license plate DM 80653.

The July 4 shooting was just the latest to shatter the rituals of American life. Schools, churches, grocery stores and now community parades have all become killing grounds in recent months. This time, the bloodshed came as the nation tried to find cause to celebrate its founding and the bonds that still hold it together.