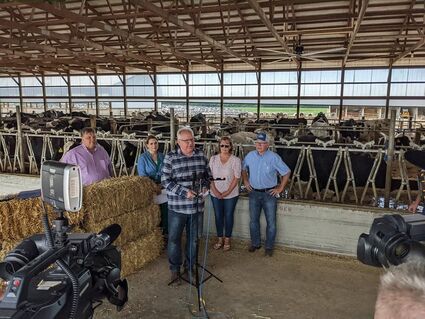 FOLEY, Minn. - As a couple hundred cows contentedly grazed on feed Thursday, occasionally letting out a gentle "moo" or two, Gov. Tim Walz lauded the bipartisan cooperation that led to the passing of the agriculture bill in May.

Walz, along with Lt. Gov. Peggy Flanagan, Agriculture Commissioner Thom Petersen and a handful of state legislators, toured the Roadside Acres farm to see how the bill's drought-relief funding will be used and learn how broadband has improved the farm's operations. He then had a ceremonial bill-signing atop a stack of hay bales.