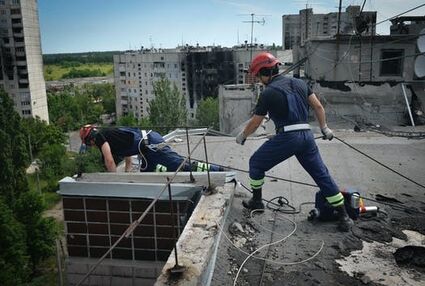 Ukrainian rescuers dismantle the roof of a high-rise building damaged by Russian shelling in one of the residential areas of Kharkiv, Ukraine, Thursday, June 30, 2022.

SLOVIANSK, Ukraine - Russian forces withdrew from a strategic Black Sea island Thursday, potentially easing the threat to the vital Ukrainian port city of Odesa, but kept up their push to encircle the last stronghold of resistance in the eastern province of Luhansk.

The Kremlin portrayed the pullout from Snake Island as a "goodwill gesture." But Ukraine's military claimed it forced the Russians to flee in two small speedboats following a barrage of Ukrainian artillery and missile strikes. The exact number of troops was not disclosed.

"Unable to withstand the impact of our artillery, missile and aviation units, the Russian occupiers have left Snake Island. The Odesa region is completely liberated," the Ukrainian military said in its regular social media update Thursday evening.