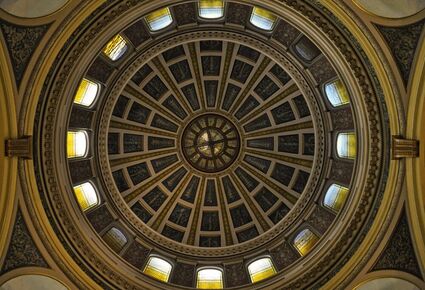 A view inside the Montana State Capitol in Helena. Photo: Harshil Shah

During the 2021 legislative session, lawmakers included a provision in House Bill 701 - the state's framework marijuana legalization bill - that allocates a single automatic license to each of Montana's tribal nations to both grow and sell marijuana. The facilities cannot be located on reservation land, and grow and sell operations must be located at the same place.

After the session, the Economic Affairs Interim Committee confirmed with the Department of Revenue that even though the bill defines these combined-use licenses as tier 1, the smallest grow size (a maximum of 1,000 square feet of grow space), they could scale up over time, just like any conventional cultivation license.

But on June 2, Brendan Beatty, director of the Department of Revenue, sent a letter to the Economic Affairs Interim Committee insisting that tribal cultivation operations cannot expand beyond tier 1 licenses.