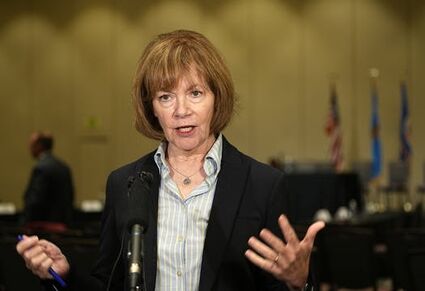 U.S. Sen. Tina Smith was a vice president at Planned Parenthood Minnesota, North Dakota, South Dakota from 2003 to 2006 - the only senator with that experience.

WASHINGTON - The lone senator who previously worked for Planned Parenthood was overwhelmed when she learned the U.S. Supreme Court had overturned Roe v. Wade, upending decades of nationwide abortion rights.

Democratic U.S. Sen. Tina Smith of Minnesota had been preparing for the ruling. But after news broke of the court's decision, realizing Democrats' fears and fulfilling Republican hopes, Smith said she confided to a staffer that she thought she would cry before pulling herself together.

"Just because you know something terrible is going to happen doesn't mean that when it actually happens you don't feel really angry and upset," said Smith, who was vice president for external affairs at what was then Planned Parenthood Minnesota, North Dakota, South Dakota from 2003 to 2006.