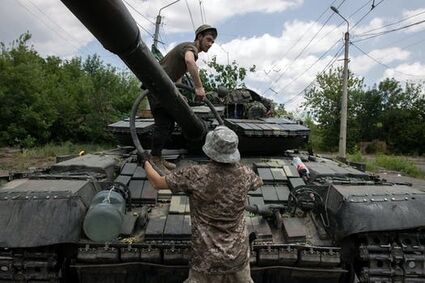 A Ukrainian T-64BV comes off the frontline for repairs in Bakhmut, in eastern Ukraine, on Wednesday, June 29, 2022.

KREMENCHUK, Ukraine - Russian forces battled Wednesday to surround the Ukrainian military's last stronghold in a long-contested eastern province, as shock reverberated from a Russian airstrike on a shopping mall that killed at least 18 in the center of the country two days earlier.

Britain's defense ministry said Russian forces were making "incremental advances" in their offensive to capture Lysychansk, the last city in the Luhansk province under Ukrainian control following the retreat of Ukraine's forces from the neighboring city of Sievierodonetsk.