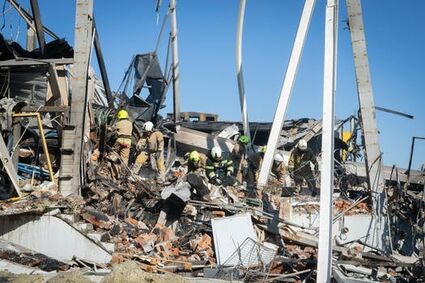 KREMENCHUK, Ukraine - France's president denounced Russia's fiery airstrike on a crowded shopping mall in Ukraine as a "new war crime" Tuesday and vowed the West's support for Kyiv would not waver, saying Moscow "cannot and should not win" the war.

The strike, which killed at least 18 people in the central city of Kremenchuk, came as leaders from the Group of Seven nations met in Europe. It was part of an unusually intense barrage of Russian fire across Ukraine, including in the capital, Kyiv, that renewed international attention as the war drags on.

Speaking at the end of the G-7 summit in Germany, French President Emmanuel Macron appeared to address that concern, vowing that the seven leading industrialized democracies would support Ukraine and maintain sanctions against Russia "as long as necessary, and with the necessary intensity."