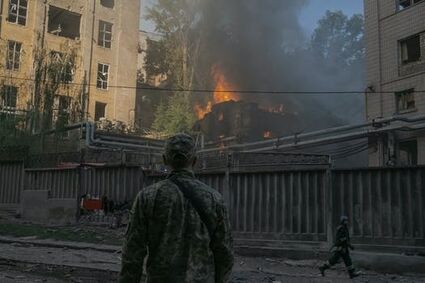 Firefighters and soldiers respond at the site of a Russian missile strike in central Kyiv, Ukraine on Sunday, June 26, 2022.

KYIV, Ukraine - Russia shattered weeks of relative calm in the Ukrainian capital with long-range missiles fired toward Kyiv early Sunday, an apparent Kremlin show-of-force as Western leaders meet in Europe to strengthen their military and economic support of Ukraine.

The strikes also damaged a nearby kindergarten, where a crater pocked the courtyard. U.S. President Joe Biden called the attacks "barbarism" after he arrived in Germany for a Group of Seven summit.