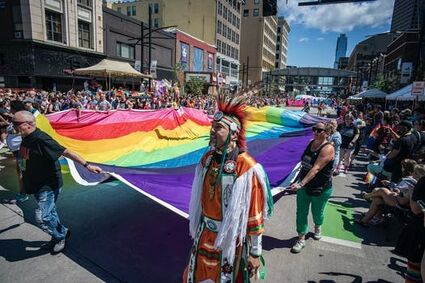 Participants walk with a rainbow Pride flag during the Twin Cities LGBTQ+ Pride March on Hennepin Avenue in downtown Minneapolis on Sunday. More than 100,000 people attended the event.

Fifty years ago, when gay rights activists organized their first Pride parade in Minneapolis, just 50 people showed up - and half remained in Loring Park to bail out the others if they got arrested for marching.

Sunday, more than 100,000 people gathered on Hennepin Avenue to celebrate the 50th anniversary of the event. They were embraced by some of Minnesota's largest employers as well as a group of Democratic heavyweights who welcomed the crowds with a plea for political action in response to recent moves that they said threaten the lesbian, gay, bisexual and transgender community.

Several pre-parade speakers denounced the U.S. Supreme Court's decision Friday to overturn Roe v. Wade, noting that Justice Clarence Thomas proclaimed that the legal rationale for banning abortion should be used to overturn cases establishing rights to contraception, same-sex consensual relations and same-sex marriage. The speakers urged attendees to get out and vote this fall for people who support their causes.