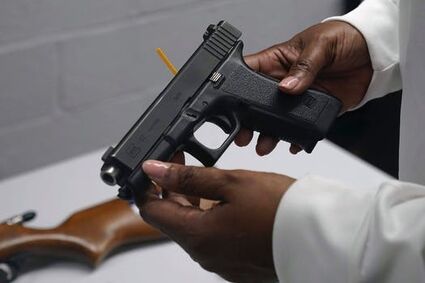 A handgun from a collection of illegal guns at a gun buyback event in New York. The Supreme Court on Thursday struck down a restrictive New York gun law in a major ruling for gun rights.

WASHINGTON - In a major expansion of gun rights after a series of mass shootings, the Supreme Court said Thursday that Americans have a right to carry firearms in public for self-defense, a ruling likely to lead to more people legally armed. The decision came out as Congress and states debate gun-control legislation.

About one-quarter of the U.S. population lives in states expected to be affected by the ruling, which struck down a New York gun law. The high court's first major gun decision in more than a decade split the court 6-3, with the court's conservatives in the majority and liberals in dissent.

Across the street from the court, lawmakers at the Capitol sped toward passage of gun legislation prompted by recent massacres in Texas,New York and California. Senators cleared the way for the measure, modest in scope but still the most far-reaching in decades.