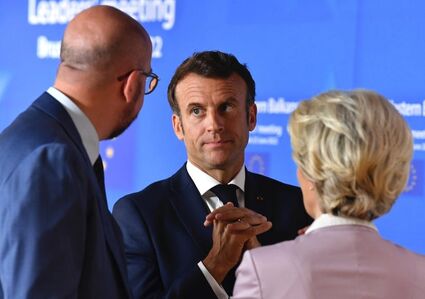 European Commission President Ursula von der Leyen, right, speaks with French President Emmanuel Macron, center, and European Council President Charles Michel prior to a group photo with Western Balkan leaders at an EU summit in Brussels, Thursday, June 23, 2022. European Union leaders are expected to approve Thursday a proposal to grant Ukraine a EU candidate status, a first step on the long toward membership. The stalled enlargement process to include Western Balkans countries in the bloc is also on their agenda at the summit in Brussels.

BRUSSELS - The European Union agreed Thursday to put Ukraine on a path toward EU membership, acting with uncharacteristic speed and unity to pull the embattled country further away from Russia's influence and bind it more closely to the West.

Meeting at a summit in Brussels, leaders of the EU's 27 nations mustered the required unanimous approval to grant Ukraine candidate status. That sets in motion a membership process that could take years or even decades.

Ukrainian President Volodymyr Zelenskyy tweeted his gratitude and declared: "Ukraine's future is within the EU."