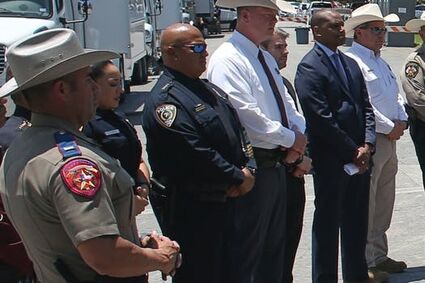 Uvalde School Police Chief Pete Arredondo, third from left, stands during a news conference outside of the Robb Elementary school in Uvalde, Texas, on May 26, 2022.

DALLAS - The Uvalde school district's police chief was put on leave Wednesday following allegations that he erred in his response to the mass shooting at Robb Elementary School that left 19 students and two teachers dead.

Uvalde Consolidated Independent School District Superintendent Hal Harrell said that he put schools police Chief Pete Arredondo on administrative leave because the facts of what happened remain unclear. In a statement, Harrell did not address Arredondo's actions as on-site commander during the attack but said he didn't know when details of federal, state and local investigations into the law enforcement response to the slayings would be revealed.

"From the beginning of this horrible event, I shared that the district would wait until the investigation was complete before making personnel decisions," Harrell said. "Because of the lack of clarity that remains and the unknown timing of when I will receive the results of the investigations, I have made the decision to place Chief Arredondo on administrative leave effective on this date."