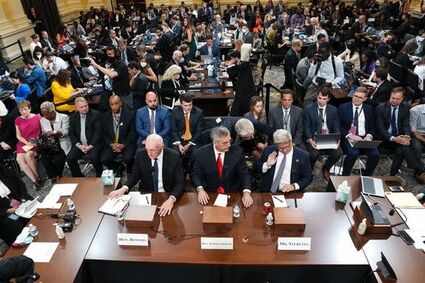 Witnesses arrive for the fourth hearing held by the House committee investigating the Jan. 6, 2021 attack on the Capitol, in Washington on Tuesday, June 21, 2022. (Doug Mills/The New York Times)

WASHINGTON - The House 1/6 committee heard chilling, tearful testimony Tuesday that Donald Trump's relentless pressure to overturn the 2020 presidential election provoked widespread threats to the "backbone of our democracy"- election workers and local officials who fended off the defeated president's demands despite personal risks.

The panel investigating the Jan. 6, 2021, attack at the U.S. Capitol focused on Trump's efforts to undo Joe Biden's victory in a most local way - by repeatedly leaning on public officials in key battleground states with shocking proposals to reject ballots outright or to submit alternative electors for the final tally in Congress.

The high-profile pressure, described as potentially illegal, was fueled by the president's false claims of voter fraud - which, the panel says, spread dangerously in the states and ultimately led directly to the deadly insurrection at the Capitol.