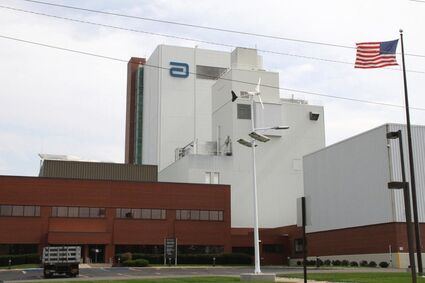 FILE - An Abbott Laboratories manufacturing plant is shown in Sturgis, Mich., on Sept. 23, 2010. Severe weather has forced Abbott Nutrition to pause production at a Michigan baby formula factory that had just restarted. The company said late Wednesday, June 15, 2022 that production for its EleCare specialty formula has stopped, but it has enough supply to meet needs until more formula can be made.

Severe weather has forced Abbott Nutrition to pause production at a Michigan baby formula factory that had just restarted after being closed for several months, contributing to a national shortage.

Production for Abbott's EleCare specialty formula has been suspended, but there is enough supply to meet demand until production is restarted, the company said. Abbott had prioritized ramping up production of the specialty formula for infants with severe food allergies and digestive problems who have few other options for nutrition.

Abbott says it needs to assess damage and re-sanitize the factory after severe thunderstorms and heavy rains swept through southwestern Michigan late Monday. Spokesman Jonathon Hamilton said flooding hit a few areas of the factory, but he declined to provide more specific details about damage.