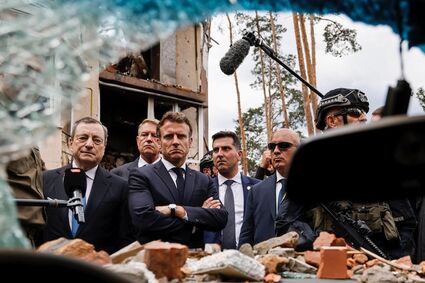 Italian Prime Minister Mario Draghi, left, and French President Emmanuel Macron watch debris as they visit Irpin, outside Kyiv, Thursday, June 16, 2022. The leaders of France, Germany, Italy and Romania arrived in Kyiv on Thursday in a show of collective European support for the Ukrainian people as they resist Russia's invasion, marking the highest-profile visit to Ukraine's capital since Russia invaded its neighbor.

KYIV, Ukraine - Four European leaders expressed their support for Ukraine on Thursday while meeting with President Volodymyr Zelenskyy, vowing to back Kyiv's candidacy to eventually join the European Union and offering more weapons to fend off Russia's invasion.

French President Emmanuel Macron promised Ukraine six more truck-mounted artillery guns, the latest in a new round of Western arms pledges as the war grinds on in the Donbas region in the east.

France, Germany, Italy and Romania "are doing everything so that Ukraine alone can decide its fate," Macron said at a news conference with Zelenskyy and the others.