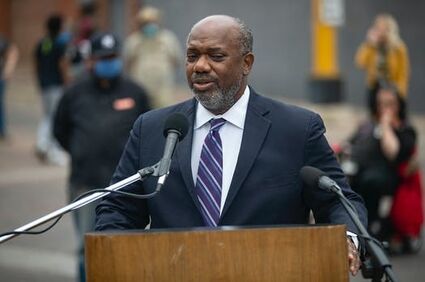 Minneapolis attorney Jerry Blackwell is the second federal judge nominee for Minnesota under the Biden administration.

President Joe Biden on Wednesday nominated Jerry Blackwell to be the next federal judge in Minnesota, elevating the Minneapolis attorney who gained international esteem for his role in the prosecution of former Minneapolis police officer Derek Chauvin for the killing of George Floyd.

Should the longtime corporate lawyer's nomination clear the U.S. Senate, Blackwell will further bolster a long legal resume that includes successfully winning the first pardon for a posthumous applicant in state history. He achieved national recognition in 2021 for his help prosecuting Chauvin, highlighted by Blackwell delivering the state's opening statements and stirring closing rebuttal remarks before a jury found Chauvin guilty.

"Jerry Blackwell is widely respected and loved within the Minnesota legal community," said U.S. Sen. Amy Klobuchar, D-Minn., who helped convene the selection committee that eventually recommended Blackwell. "His extensive trial experience - including the successful prosecution of the murder of George Floyd - makes him an excellent choice to be a U.S. District Court Judge. As a member of the Senate Judiciary Committee, I look forward to working with my colleagues on both sides of the aisle to confirm him."