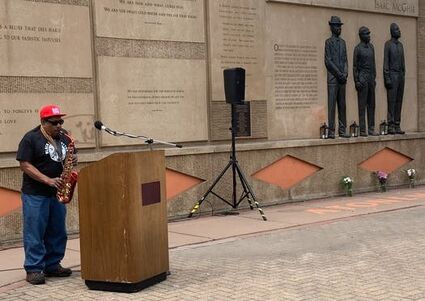 Billy Mahdi played saxophone during the annual Day of Remembrance at the Clayton Jackson McGhie Memorial in downtown Duluth on Wednesday.

DULUTH - Local blues player Billy Mahdi stood in front of the memorial to Elias Clayton, Elmer Jackson and Isaac McGhie on Wednesday afternoon with a message for the 50-some people who turned out downtown on the 102nd anniversary of the Duluth lynching.

Mahdi led the group in a singalong, accompanied on his alto saxophone to kick off the Clayton Jackson McGhie Memorial's annual Day of Remembrance. The event honors the three Black circus workers who were taken from jail cells by a mob and hung from a light pole in front of a reported 10,000 people on June 15, 1920.