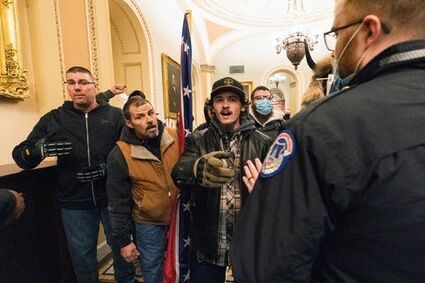 Kevin Seefried, second from left, holds a Confederate battle flag as he and other rioters are confronted by U.S. Capitol Police officers outside the Senate Chamber inside the Capitol in Washington, Jan. 6, 2021.

WASHINGTON - A federal judge on Wednesday convicted a Confederate flag-toting man and his son of charges that they stormed the U.S. Capitol together during the riot on Jan. 6, 2021, to obstruct Congress from certifying Joe Biden's presidential victory.

U.S. District Judge Trevor McFadden delivered the verdict from the bench after hearing two days of testimony without a jury for the trial of Kevin Seefried and his adult son, Hunter.

McFadden convicted both Delaware men of a felony count: obstruction of an official proceeding, the joint session of Congress for certifying the Electoral College that day.