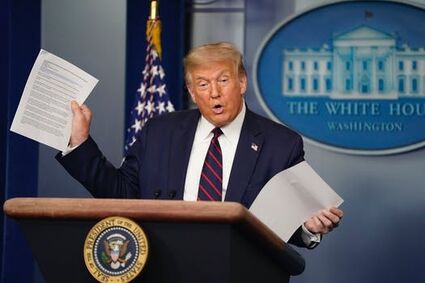 President Donald Trump held up copies of news articles about mail-in ballots during a coronavirus briefing at the White house in July 2020.

Three days before Congress was slated to certify the 2020 presidential election, a little-known Justice Department official named Jeffrey Clark rushed to meet President Donald Trump in the Oval Office to discuss a last-ditch attempt to reverse the results.

Clark, an environmental lawyer by trade, had outlined a plan in a letter he wanted to send to the leaders of key states Joe Biden won. It said that the Justice Department had "identified significant concerns" about the vote and that the states should consider sending "a separate slate of electors supporting Donald J. Trump" for Congress to approve.

In fact, Clark's bosses had warned there was not evidence to overturn the election and had rejected his letter days earlier. Now they learned Clark was about to meet with Trump. Acting attorney general Jeffrey Rosen tracked down his deputy, Richard Donoghue, who had been walking on the Mall in muddy jeans and an Army T-shirt. There was no time to change. They raced to the Oval Office.