Gunfire came from a vehicle that fled the scene, police said 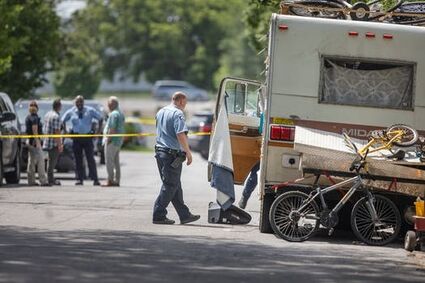 Minneapolis law enforcement work the scene of a homicide near Plymouth and Girard Avenue North, in Minneapolis, Minn., on Tuesday, June 14, 2022.

Gunfire from a vehicle hit and killed a woman inside a parked recreational vehicle Tuesday morning on a north Minneapolis residential street, authorities said.

A man also in the pickup-style camper was not wounded, and police are asking for the public's help in finding whoever is responsible for the gunfire about 9:50 a.m. on Girard Avenue N. just north of Plymouth Avenue.

Police have yet to address a motive but said they do not believe that the shooting was random in nature. No arrests have been made, and police have not released any information about the vehicle that fled the scene.