Metro swelters Tuesday; 100-degree temperatures to return for the weekend 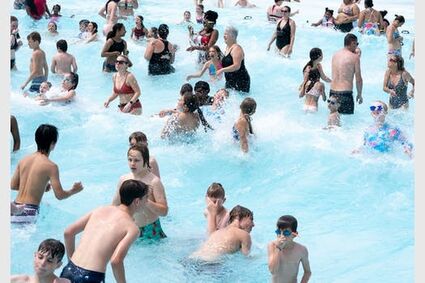 Swimmers cooled down in the wave pool Tuesday at Bunker Beach Water Park in Coon Rapids.

Hot, hot, hot. And windy and humid, too.

Keeping cool was the order of the day Tuesday in the Twin Cities and across much of southern Minnesota as temperatures soared into the upper 90s and heat indexes - what it actually feels like outdoors when combining the temperature with the relative humidity - hit triple digits.

An excessive heat warning went into effect at 11 a.m. in the seven-county metro area and was scheduled to last until 8 p.m. The combination of heat and humidity made for "a dangerous situation in which heat illnesses are likely," the National Weather Service said in issuing the warning.