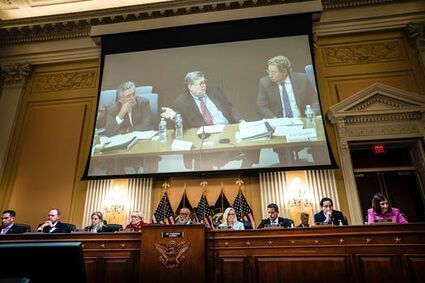 Attorney General William Barr is seen in a recording played during the second day of the hearing held by the House committee investigating the Jan. 6, 2021, attack on the Capitol in Washington on Monday.

WASHINGTON - Donald Trump's closest campaign advisers, top government officials and even his family were dismantling his false claims of 2020 election fraud ahead of Jan. 6, but the defeated president seemed "detached from reality" and kept clinging to outlandish theories to stay in power, the committee investigating the Capitol attack was told Monday.

With gripping testimony, the panel is laying out in step-by-step fashion how Trump ignored his own campaign team's data as one state after another flipped to Joe Biden, and instead latched on to conspiracy theories, court cases and his own declarations of victory rather than having to admit defeat.

Trump's "big lie" of election fraud escalated and transformed into marching orders that summoned supporters to Washington and then sent them to the Capitol on Jan. 6 to block Biden's victory.