Theme was "Healing within Nature" 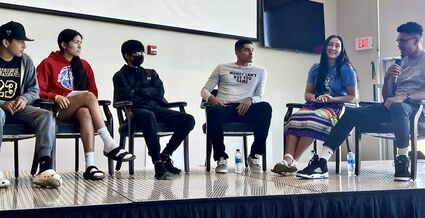 COVID cancelled many events over the last couple years including the 14th Annual Youth Leadership Conference back in 2019. Back in those days, the event had been held at Red Lake High School. Now, reimagined by new Youth Conference Coordinator Bianca Mendoza, who was celebrating one year at the helm on the second day of the event, the conference has been moved to the Red Lake Nation College with a slight name change.

The Conference held before at the High School included mostly Red Lake High students. Now reimagined, 226 students of which 65% were under age 24 attending from schools at Red Lake, Kelliher, Blackduck, Bemidji, and Trek North. Others were older.

According to Coordinator Mendoza, there was some concern (even though all were Red Lakers) how well the diverse group would mesh. Well, they found common ground and many new friends made and new things learned. It was a great success.

The 2022 Red Lake Youth Conference was held on Wednesday and Thursday June 8th and 9th. The conference was blessed with two beautiful days. Sunny skies and lower 70's, allowed some of the events to be held outside the college lake side including hand drum making, moccasin making and how to make Indigenous Teas.

Workshops and presentations were held from 8:00 AM to 4:15 PM on Wednesday and Thursday. As in the past several workshops occurred simultaneously.

A host of Red Lake member professionals, and well-known guest speakers and performers from across Indian Country, joined together to share their knowledge to motivate youth, and to promote native values, tradition, and culture.

The Youth Council, formed in 2006 with more than a dozen members, are key players in the organization of the Youth Conference

The day began with an Opening Ceremony and a song by Kordae Kingbird. Those attending from the Red Lake Tribal Council and Hereditary Chiefs were recognized.

Then came a special visit from two members of the cast of Reservation Dogs Paulina Alexis & Lane Factor. Alexis missed a flight so appeared to the group via ZOOM, Factor however was at the event. Reservation Dogs is a half-hour comedy series online exclusively on Hulu that follows the exploits of four Indigenous teenagers in rural Oklahoma who steal, rob, and save in order to get to the exotic, mysterious and faraway land of California.

Filmed on location in Okmulgee, Oklahoma, Reservation Dogs is a breakthrough in Indigenous representation on television both in front of and behind the camera. Every writer, director, and series regular on the show is Indigenous. This first-of-its-kind creative team tells a story that resonates with them and their lived experiences – and invites audiences into a surprisingly familiar and funny world.

Participants then had several breakout workshops to choose from. Athena Cloud of Red Lake presented "Resilience Beyond the Boundaries'; Sheldon Smith of Rio Rancho, NM, presented a workshop entitled, "I Got This;" James Pakootas of Spokane, WA. Presented "Hope Despite Trauma;" Winona & Aazhide-giizhig Kingbird of Red Lake, did a hands-on workshop on "Moccasin Making;" and Giwiitaa Staff of Red Lake presented, "Women's Teachings & Healthy Relationships."

After a break, a second Round of Workshops began around 2:15 which mirrored the first group of workshops so participants could attend other areas of interest.

Around 4:30 pm, closing remarks closed the day along with a Meet & Greet with presenters and special guests. But not over yet, from 6 til 9 pm participants were treated to an Entertainment and Comedy Night.

The day began again with an opening ceremony and song by Kordae Kingbird.

Red Lake Nation College President Dan King had been scheduled to kick off Day 2 with a presentation called "Fly with Eagles," but was unable to attend. No worries. Shieleen Omen, Executive Assistant to the President did a bang-up job taking his place. Floyd "Buck" Jourdain joined in and spoke of the creation, history, and background of the annual Youth Conference. The Conference was created under the Chairman Jourdain Administration back in 2006.

Keynote speakers George Hill, Robert McClain, & Grace White spoke on the subject of "How basketball helped me," followed. White had just recently held a basketball camp for girls up to age 17, giving back to the community.

After a short break, Dr. Anton Treuer professor of Ojibwe at Bemidji State University became the second keynote speaker of the morning who presented a version of his book, "Everything you Wanted to Know About American Indians but Were too Afraid to Ask."

After lunch, a new set of Breakout Workshops:

After a break, a second Round of Workshops began around 2:15 which were a repeat of the first group of breakout workshops. 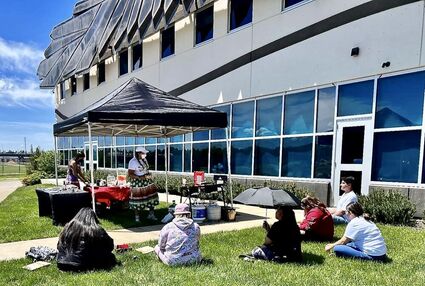 The day nearly done, the group of attendees gathered in the Commons area for closing remarks and then the students were dismissed to the warm spring weather.

Those so inclined returned at 6:00 pm (to 9) for the Hoop Medicine Basketball Camp.

The impetus for the Youth Leadership Conference occurred after the formation of the Red Lake Nation Youth Council in 2006, after the Red Lake tragedy. The group began looking for ways to teach leadership skills, and to celebrate the accomplishments of the Nation's youth academically and in other ways. Topics and organization are by Red Lake Youth.