National Congress of American Indians heads into meeting amid disarray 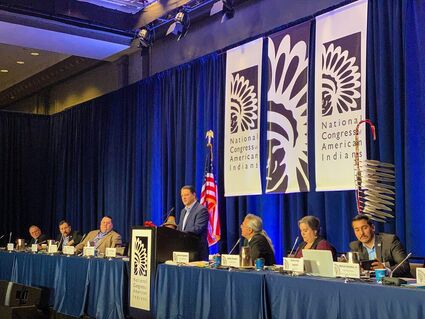 Dante Desiderio, then serving as executive director of NAFOA, addresses the winter session of the National Congress of American Indians in Washington, D.C., on February 12, 2020. The meeting was NCAI's last in-person session prior to the onset of the COVID-19 pandemic a month later Photo by Indianz.Com (CC BY-NC-SA 4.0)

WASHINGTON, D.C. - Tribal leaders and their advocates are raising fresh concerns about the National Congress of American Indians ahead of the organization's first in-person meeting in more than two years.

NCAI kicks off its mid-year meeting in Alaska on Monday. On the eve of the event, Dante Desiderio has been suspended as chief executive officer, according to an Indian law and policy expert with close ties to the largest inter-tribal advocacy organization in the U.S.

"I heard they are messed up," one tribal leader relayed to Indianz.Com, although a more explicit word was used to describe the situation at NCAI.