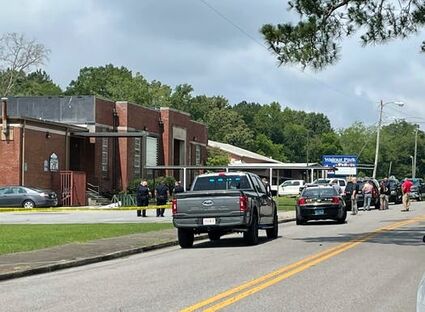 Officials gather outside Walnut Park Elementary School where a man was shot to death by police, Thursday, June 9, 2022, in Gadsden, Ala.

GADSDEN, Ala. - A man who tried to enter an Alabama elementary school where a summer program was being held was shot to death by police Thursday morning, authorities said.

Gadsden City Schools Superintendent Tony Reddick told reporters that a "potential intruder" went to several doors trying to get into Walnut Park Elementary School, where a summer literacy program was being conducted for 34 children. All the exterior doors were locked and the principal contacted the school resource officer when she realized what was happening, Reddick said.

The resource officer confronted a person who attempted to break into a marked Rainbow City police car near the school, according to a statement from the Alabama Law Enforcement Agency. More officers from the Gadsden Police Department showed up to assist, the statement said.