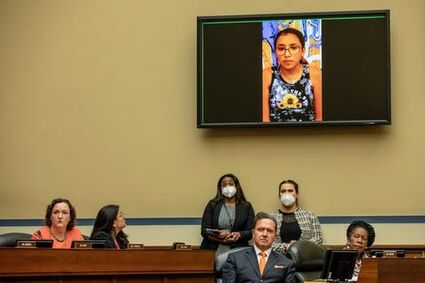 Miah Cerrillo, a fourth-grade student at Robb Elementary School in Uvalde who survived the mass shooting that killed 19 of her classmates and two teachers, testified to the House Committee on Oversight and Reform in Washington on June 8, 2022.

WASHINGTON - The House passed a wide-ranging gun control bill Wednesday in response to recent mass shootings in Buffalo, New York, and Uvalde, Texas, that would raise the age limit for purchasing a semi-automatic rifle and prohibit the sale of ammunition magazines with a capacity of more than 15 rounds.

The legislation passed by a mostly party-line vote of 223-204. It has almost no chance of becoming law as the Senate pursues negotiations focused on improving mental health programs, bolstering school security and enhancing background checks. But the House bill does allow Democratic lawmakers a chance to frame for voters in November where they stand on policies that polls show are widely supported.

"We can't save every life, but my God, shouldn't we try? America we hear you and today in the House we are taking the action you are demanding," said Rep. Veronica Escobar, D-Texas. "Take note of who is with you and who is not."