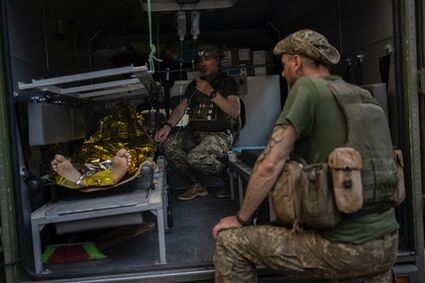 An injured Ukrainian servicemen is transferred to a medical facility after getting an emergency medical treatment in the Donetsk region, eastern Ukraine, Tuesday, June 7, 2022.

BAKHMUT, Ukraine - Workers pulled scores of bodies from smashed buildings in an "endless caravan of death" inside the devastated city of Mariupol, authorities said Wednesday, while fears of a global food crisis escalated over Ukraine's inability to export millions of tons of grain through its blockaded ports.

At the same time, Ukrainian and Russian forces battled fiercely for control of Sievierodonestk, a city that has emerged as central to Moscow's grinding campaign to capture Ukraine's eastern industrial heartland, known as the Donbas.

As the fighting dragged on, the human cost of the war continued to mount. In many of Mariupol's buildings, workers are finding 50 to 100 bodies each, according to a mayoral aide in the Russian-held port city in the south.