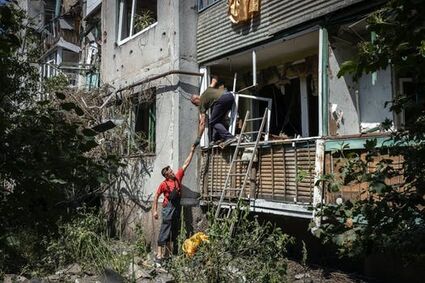 Two men work on Tuesday, May 31, 2022, to cover broken windows after a Russian missile strike overnight on an apartment complex in Sloviansk, in eastern Ukraine.

SLOVIANSK, Ukraine - Russian forces in a "frenzied push" have seized half of Sievierodonetsk, the eastern Ukrainian city that is key to Moscow's efforts to complete the capture of the industrial Donbas region, the mayor said Tuesday.

"The city is essentially being destroyed ruthlessly block by block," Oleksandr Striuk said. He said heavy street fighting continued and artillery barrages threatened the lives of the estimated 13,000 civilians still sheltering in the ruined city that once was home to more than 100,000.

A Russian airstrike on Sievierodonetsk hit a tank of nitric acid at a chemical factory, causing a huge leak of fumes, according to Serhiy Haidai, governor of the Luhansk region. He posted a picture of a big cloud hanging over the city and urged residents to stay inside and wear gas masks or improvised ones.