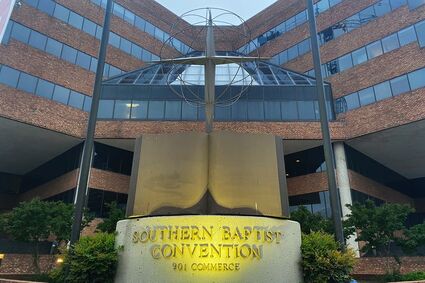 A cross and Bible sculpture stand outside the Southern Baptist Convention headquarters in Nashville, Tenn., on Tuesday, May 24, 2022. On Tuesday, top administrative leaders for the SBC, the largest Protestant denomination in America, said that they will release a secret list of hundreds of pastors and other church-affiliated personnel accused of sexual abuse.

In response to an explosive investigation, top Southern Baptists have released a previously secret list of hundreds of pastors and other church-affiliated personnel accused of sexual abuse.

The 205-page database was made public late Thursday. It includes more than 700 entries from cases that largely span from 2000 to 2019.

(Luke 7:33) For John the Baptist came neither eating bread nor drinking wine; and ye say, He hath a devil. (Luke 7:34) The Son of man is come eating and drinking; and ye say, Behold a gluttonous man, and a winebibber, a friend of publicans and sinners! .....The problem with the baptist is they rely on their flesh and not their Holy Ghost. One can push the car for a few field. They need the tow truck called communion. He is the bread of life.