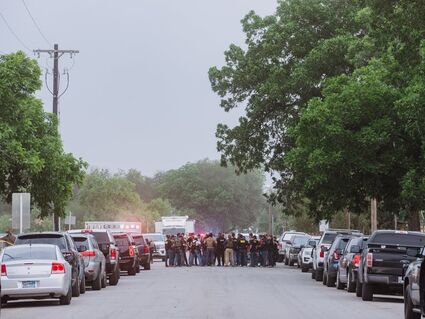 Police outside Robb Elementary School in Uvalde, Texas, where a gunman killed at least 18 children and a teacher on Tuesday, May 24, 2022. The attack in this rural town west of San Antonio was the deadliest American school shooting since the massacre at Sandy Hook a decade ago. (Christopher Lee/The New York Times)

UVALDE, Texas - Onlookers urged police officers to charge into the Texas elementary school where a gunman's rampage killed 19 children and two teachers, witnesses said Wednesday, as investigators worked to track the massacre that lasted upwards of 40 minutes and ended when the 18-year-old shooter was killed by a Border Patrol team.

"Go in there! Go in there!" nearby women shouted at the officers soon after the attack began, said Juan Carranza, 24, who saw the scene from outside his house, across the street from Robb Elementary School in the town of Uvalde. Carranza said the officers did not go in.

Javier Cazares, whose fourth grade daughter, Jacklyn Cazares, was killed in the attack, said he raced to the school when he heard about the shooting, arriving while police were still massed outside the building.