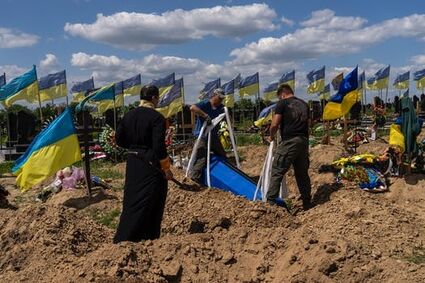 KYIV, Ukraine - Workers digging through the rubble of an apartment building in Mariupol found 200 bodies in the basement, Ukrainian authorities said Tuesday, as more horrors come to light in the ruined city that has seen some of the worst suffering of the 3-month-old war.

The bodies were decomposing and the stench hung over the neighborhood, said Petro Andryushchenko, an adviser to the mayor. He did not say when they were discovered, but the sheer number of victims makes it one of the deadliest known attacks of the war.

Heavy fighting, meanwhile, was reported in the Donbas, the eastern industrial heartland that Moscow's forces are intent on seizing. Russian troops took over an industrial town that hosts a thermal power station, and intensified efforts to encircle and capture Sievierodonetsk and other cities.