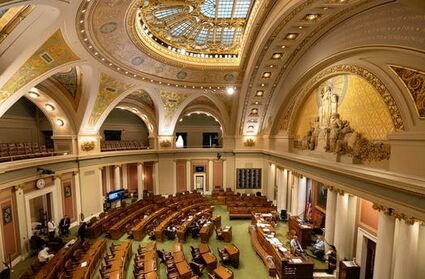 Representatives spoke in the House chamber during a recess Sunday, May 24, before a midnight deadline to pass bills.

Minnesota legislators spent hours giving fond farewell speeches Monday as billions of dollars in tax and spending proposals remained in limbo - and the campaign trail blame game that will dominate the next five months was underway.

"I'm hearing pretty clearly from Minnesotans, 'Give us the money back from this and invest in the things that make our lives a little easier,'" said DFL Gov. Tim Walz, who has sole power to call legislators back into a special session to finish the tax, education, public safety and other bills that state leaders failed to wrap up during their regular session. "It shouldn't be that hard and we can get win-win-wins across the board."

But he ended a meeting with top legislative leaders Monday with no timeline or clarity on next steps. Walz said he's ready to call legislators back, but Senate Republicans asked for a few days to "decompress" after a marathon of legislative work over the past week.