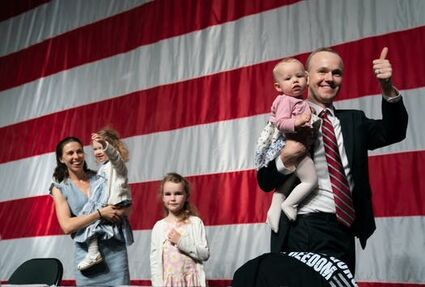 GOP attorney general candidate Jim Schultz left the stage with his wife, Molly, and their children during this month's state Republican convention in Rochester.

Jim Schultz's high school classmates in Annandale were convinced that the well-liked cross-country runner and devout Catholic would one day become a priest. After two years in seminary, he was well on that path.

But a detour to Harvard Law School and a career pivot into the legal sector back home in Minnesota instead put Schultz on a surprising journey that now has him as the state Republican Party's preferred candidate to challenge DFL Attorney General Keith Ellison in an election that Republicans are talking about with grave seriousness.

"I feel like we're losing the state I grew up in," said the 36-year-old native of the small central Minnesota town of South Haven in an interview last week, days after securing the Minnesota GOP's endorsement at its convention in Rochester.