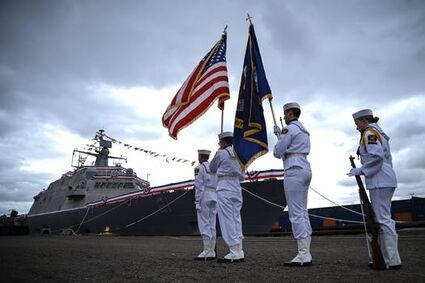 The US Naval Sea Cadet Corps, Twin Cities Squadron, prepares to present the colors before the commissioning ceremony for the USS Minneapolis-St. Paul Saturday, May 21, 2022 at the Port of Duluth in Duluth, Minn..

DULUTH - The USS Minneapolis-St. Paul, a speedy combat ship built for near-shore missions, was put into active service during a ceremony Saturday morning at the Port of Duluth, the first time a U.S. Navy warship was commissioned in Minnesota.

"Man our ship and bring her to life," the ship's sponsor, former deputy undersecretary of the Navy Jodi Greene said from a platform in front of the 387-foot, steel-hulled vessel.

Dozens of sailors dressed in whites jogged in a single-file line up an aisle through the crowd and to the ship as the Navy Band played "Anchors Aweigh." There was a gun salute, a singing of "The Star-Spangled Banner" and a military helicopter flyover.