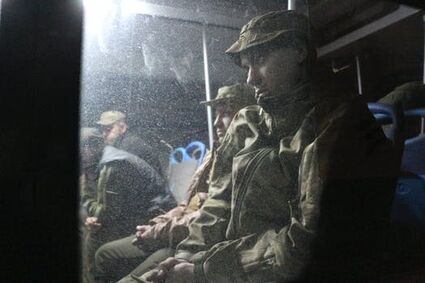 Ukrainian servicemen sit in a bus after they left the besieged Mariupol's Azovstal steel plant, near a penal colony in Olyonivka, in territory under the government of the Donetsk People's Republic, eastern Ukraine, Friday, May 20, 2022.

POKROVSK, Ukraine - Concern mounted Saturday over Ukrainian fighters who became prisoners at the end of Russia's brutal three-month siege of Mariupol, as a Moscow-backed separatist leader vowed they would face tribunals.

Russia claimed full control of the Azovstal steel plant, which for weeks was the last holdout in Mariupol and a symbol of Ukrainian tenacity in the strategic port city, now in ruins with more than 20,000 residents feared dead. Its seizure delivers Russian President Vladimir Putin a badly wanted victory in the war he began in February.

As the West rallies behind Ukraine, Polish President Andrzej Duda arrived in Ukraine on an unannounced visit and will address the country's parliament on Sunday, his office said.