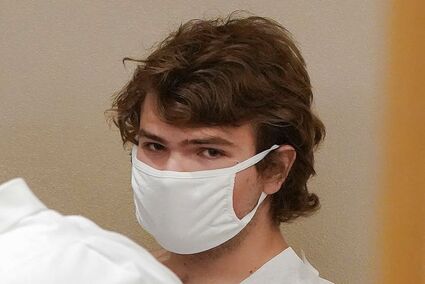 Payton Gendron appears during his arraignment in Buffalo City Court, Saturday, May 14, 2022, in Buffalo, N.Y. Gendron was arraigned on first-degree murder charges and ordered detained without bail. Police officials said the 18-year-old was wearing body armor and military-style clothing when he pulled up and opened fire at people at a Tops Friendly Market. (Mark Mulville/The Buffalo News via AP)

BUFFALO, N.Y. - The white 18-year-old who fatally shot 10 people at a Buffalo supermarket researched the local demographics and arrived a day in advance to conduct reconnaissance with the intent of killing as many Black people as possible, officials said Sunday.

The racially motivated attack came a year after the gunman was taken to a hospital by State Police after making threats involving his high school, according to authorities.

He wasn't charged with a crime and was out of the hospital within a day and a half, police said, but the revelation raised questions about his access to weapons and whether he could have been under closer supervision by law enforcement.