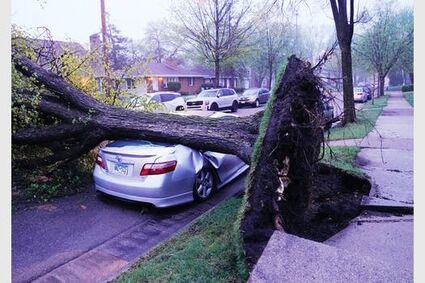 A fallen tree, toppled by high winds from an overnight thunderstorm, flattened a parked car on Washburn Ave. S. Near 55th St. Thursday, May 12, 2022.

A grain bin toppled by high winds in Kandiyohi County fell onto a car and killed a passenger inside on Thursday night, the second night in a row of tornado activity in Minnesota.

The National Weather Service confirmed the fatality occurred at 7 p.m. Thursday about two miles northeast of the town of Blomkest. Few other details were available, and a local dispatcher said no information would be immediately released.

A night earlier, the Weather Service confirmed, a tornado touched down in Coon Rapids, and there were initial reports of other touchdowns Thursday night in several greater Minnesota spots. A Cass County dispatcher said law enforcement was trying to confirm reports of a tornado touchdown in that county, and that lots of trees were down.