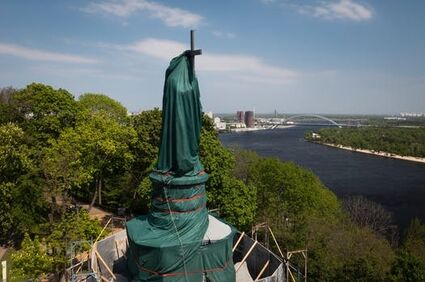 A early 200-year old monument to legendary Prince Volodymyr, a Kyiv landmark and one of the symbols of the Ukrainian capital, is wrapped to protect it from the Russian shelling in Kyiv, Ukraine, Thursday, May 12, 2022.

KYIV, Ukraine - Finland's leaders Thursday came out in favor of applying to join NATO, and Sweden could do the same within days, in a historic realignment on the continent 2 1/2 months after Russian President Vladimir Putin's invasion of Ukraine sent a shiver of fear through Moscow's neighbors.

The Kremlin reacted by warning it will be forced to take retaliatory "military-technical" steps.

On the ground, meanwhile, Russian forces pounded areas in central, northern and eastern Ukraine, including the last pocket of resistance in Mariupol, as part its offensive to take the industrial Donbas region, while Ukraine recaptured some towns and villages in the northeast.