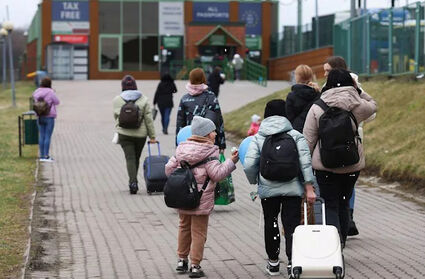 Ukrainian refugees walk towards border crossing from Poland to Ukraine, amid the Russian invasion of Ukraine, in Medyka

WARSAW (Reuters) -The number of people who have fled Ukraine to escape Russia's invasion has passed 6 million, in Europe's worst refugee crisis since the end of World War Two, a U.N. refugee agency said on Thursday.

Russia's invasion, which started on Feb. 24, has triggered a massive displacement of people, including more than 8 million Ukrainians within the country, according to the latest International Organization for Migration (IOM) report.

U.N. data showed that 6.03 million had fled Ukraine as of Wednesday.