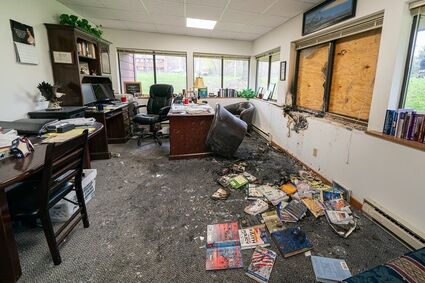 The Wisconsin Family Action headquarters in Madison, Wis., was set on fire on Sunday morning in an act of vandalism that included the attempted use of a Molotov cocktail and graffiti that read, "If abortions aren't safe then you aren't either," according to police.

MADISON, Wis. - Vandals struck an anti-abortion group office, where a fire broke out and a Molotov cocktail was found, authorities said Sunday.

Madison police spokeswoman Stephanie Fryer told the Wisconsin State Journal that the fire reported shortly after 6 a.m. Sunday at the Wisconsin Family Action office in Madison was suspicious in nature. He said someone also spray-painted a message outside the building. Federal officials and the Madison Fire Department are helping with the investigation.

No one was injured, and officials were still working to determine how much damage the fire caused.