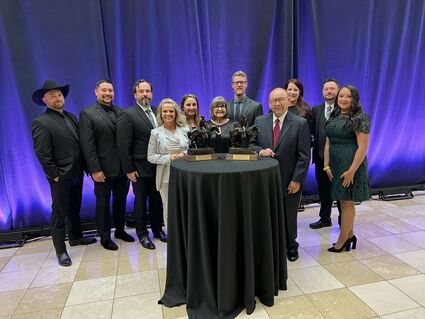 The Western Heritage Awards ceremony honors those who have made significant contributions to Western heritage through creative works in literature, music, television and film that share the great stories of the American West. Winners receive a bronze Wrangler award.

Chickasaw Nation Governor Bill Anoatubby accepted both awards, saying it was a tremendous honor for the film to be recognized among so many esteemed and celebrated individuals and creative works.

"Montford: The Chickasaw Rancher" explores Montford Johnson's historic life as a Chickasaw rancher who overcame great hardships and tragedy to establish a vast ranching empire in Indian Territory along the famous cattle highway of the American West, the Chisholm Trail.

Chickasaw Nation Productions was established in 2009 as part of Governor Anoatubby's vision to share the enduring legacy of the Chickasaw people and to illustrate how those individuals influenced the world around them.

"Montford Johnson was such an individual," Governor Anoatubby said. "Throughout his life, he continually displayed the determination and fortitude to overcome challenges. He left a legacy that can still be felt in our state and our nation today. His life story mirrors the history of commitment and perseverance that has helped Chickasaws and Oklahomans thrive."

Moses Brings Plenty, a First American actor best known for his role as "Mo" on "Yellowstone," served as the master of ceremonies at the event.

"Montford: The Chickasaw Rancher" is available on Netflix, Amazon.com, and it can be purchased on DVD or Blu-ray at ChickasawPress.com or by visiting the Chickasaw Press at 1020 N. Mississippi Ave. in Ada, Oklahoma.