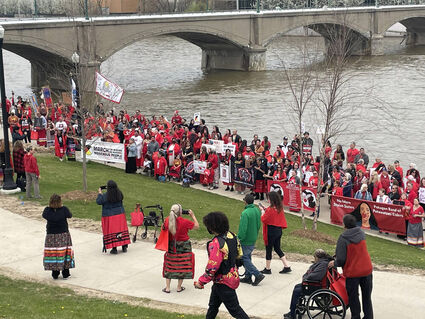 Hundreds gathered on Thursday along the shores of the Grand River in downtown Grand Rapids, Mich. (Photos/Native News Online)

Above the hums of traffic from a nearby freeway as travelers went about their daily business, speakers spoke about the tragic losses encountered in Indian Country of missing and murdered Indigenous persons. The vast majority of people in the crowd wore red in observance of those lost across Indian Coutnry.

"The problem with missing and murdered Indigenous women has been an epidemic since 1492," Melissa Isaac (Saginaw Chippewa Indian Tribe), who was an invited guest in first lady Jill Biden's box during the State of the Union, who served as the emcee of the event said.