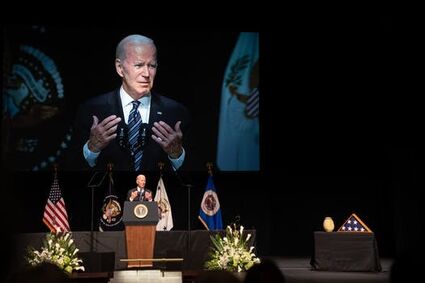 A preacher's son guided by a quiet faith, Walter "Fritz" Mondale ascended from humble beginnings in southern Minnesota all the way to the White House, forever changing the role of the vice president and acting as a "guiding light" to a generation of politicians who followed him.

"I hope we can all be Fritz's mirror, continue to spread his light," said President Joe Biden, who was among the lawmakers, friends and loved ones who gathered in Minneapolis on Sunday to reflect on his legacy. "He was one of the finest men I've ever known, one of the most decent people I've ever dealt with, and one of the toughest, smartest men I've ever worked with."

As a U.S. senator, Mondale was a champion of civil rights and social safety net programs and drew early attention to climate change. As the Democratic Party's presidential nominee in 1984, he made history by choosing a woman as his running mate.