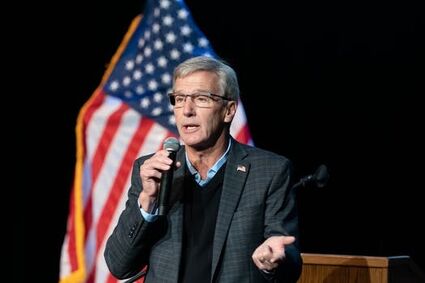 GOP governor candidate Scott Jensen told Republicans that "the hammer's coming down" on Secretary of State Steve Simon for his management of the state's election system.

Minnesota GOP gubernatorial candidate Scott Jensen took a "lock him up" message on the campaign trail recently, suggesting that Secretary of State Steve Simon deserved imprisonment for his management of the state's election system.

Speaking April 23 at the Minnesota Third Congressional District Republican organizing convention in Plymouth, Jensen sparked loud cheers from the crowd when he warned that "the hammer's coming down" on Simon, a DFLer.

"We are not voter suppressors. We have a simple attitude: Make sure that every ballot in the box belongs there. Make sure that it's easy to vote, hard to cheat, and if you cheat, you're going to jail," Jensen said. "And Steve Simon, you maybe better check out to see if you look good in stripes, because you've gotten away with too much, too long under [Minnesota Attorney General Keith] Ellison, and the hammer's coming down."