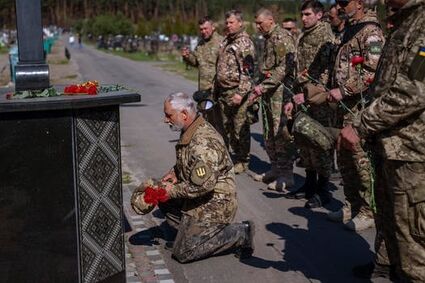 Irpin Territorial Defence and Ukrainian Army soldiers hold flowers to be placed on the graves of comrades fallen during the Russian occupation, at the cemetery of Irpin, on the outskirts of Kyiv, on Sunday, May 1, 2022.

ZAPORIZHZHIA, Ukraine - A long-awaited evacuation of civilians from a besieged steel plant in the Ukrainian city of Mariupol was under way Sunday, as U.S. House Speaker Nancy Pelosi revealed that she visited Ukraine's president to show unflinching American support for the country's defense against Russia's invasion.

Video posted online by Ukrainian forces showed elderly women and mothers with small children bundled in winter clothing being helped as they climbed a steep pile of debris from the sprawling Azovstal steel plant's rubble, and then eventually boarded a bus.

Ukrainian President Volodymyr Zelenskyy said more than 100 civilians, primarily women and children, were expected to arrive in the Ukrainian-controlled city of Zaporizhzhia on Monday.