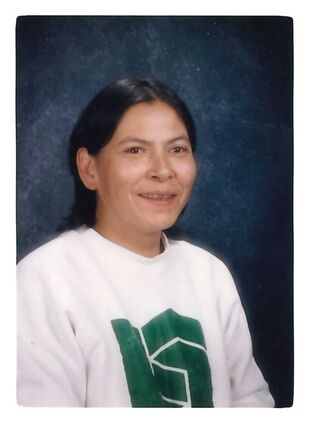 Pearl Susan Carlson, age 60, of the Bear Clan and from Red Lake, Minnesota began her journey Home on Tuesday, April 26th, 2022, from the Jourdain Perpich Extended Care Center in Red Lake, MN. She was born on December 13th, 1961, in Red Lake, MN, the daughter of Doris Jean (Graves) and Carl Carlson, Sr.

Pearl was a cook for the Red Lake School District for many years. She also worked for the Red Lake Forestry, along side Gloria Whitefeather and many others for several years. In her younger days, Pearl helped her father, who was a logger, to harvest trees from the woods. She enjoyed working on vehicles, Native American arts and crafts and powwow music. Pearl absolutely loved to cook, her specialties were frybread and hominy. She loved visiting with her family and friends and enjoyed her downtime at home watching TV and caring for her cats. Pearl spent her last years of life at the Jourdain Perpich Extended Care Center and was loved by all the staff that cared for her.

An overnight wake for Pearl will begin at 3:00 p.m. on Friday, April 29th at the Redby Community Center in Redby, MN. Funeral services will be held at 2:00 p.m. on Saturday, April 30th at the St. Antipas Episcopal Church in Redby, MN. Father George Ross will officiate. Helping to lay Pearl to rest are Dayton Carlson, Michael Spears, Harrison Dudley, Jonathan Carlson, Donald Spears, Jr., and Vincent Brown. Her honorary pallbearers are Diane Howard, Mavis Strong, Donna Howard, James Dudley, Luann Wind, and all her past co-workers and friends. Interment will be in the St. Antipas Episcopal Cemetery at Redby, MN immediately following her funeral services.

Pearl's care has been entrusted to Northern Peace Funeral Home of Walker, MN. Online condolences for the family may be left at http://www.northernpeace.com