US urges more arms for Ukraine amid fears of expanding war 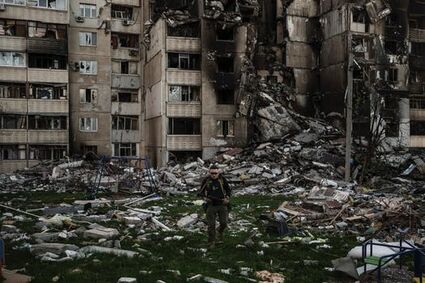 A Ukrainian serviceman walks amid the rubble of a building heavily damaged by multiple Russian bombardments near a frontline in Kharkiv, Ukraine, Monday, April 25, 2022.

TORETSK, Ukraine - The U.S. pressed its allies Tuesday to move "heaven and earth" to keep Kyiv well-supplied with weapons as Russian forces rained fire on eastern and southern Ukraine amid growing new fears the war could spill over the country's borders.

For the second day in a row, explosions rocked the separatist region of Trans-Dniester in neighboring Moldova, knocking out two powerful radio antennas close to the Ukrainian border. No one claimed responsibility for the attacks, but Ukraine all but blamed Russia.

In other developments, Poland and Bulgaria said the Kremlin is cutting off natural gas supplies to the two NATO countries starting Wednesday, the first such actions of the war. Both nations had refused Russia's demands that they pay in rubles.