Who Gets to Define Native American Art? 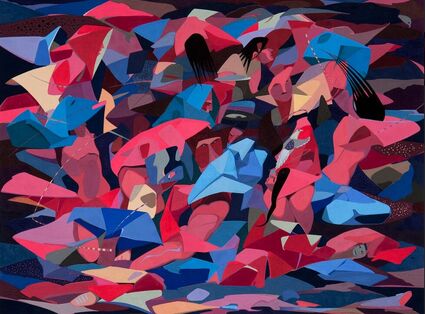 Oscar Howe was furious. Howe, a Native American artist, had submitted a painting to the 1958 Philbrook Indian Annual art competition and the jurors had turned it down. It wasn't the rejection that offended him but the rationale. Howe had begun exploring abstraction in his work, and the painting with its bold planes of color and jagged abstract shapes defied the jurors' expectations of what Native American art could look like. It was, they said, a "fine painting–but not Indian."

Howe fired back, in a response that electrified the Native American art world at the time and still is talked about today. "Who ever said, that my paintings are not in the traditional Indian style, has poor knowledge of Indian art indeed. There is much more to Indian Art, than pretty, stylized pictures," he wrote in a letter to the Philbrook. He added: "We are to be herded like a bunch of sheep, with no right for individualism, dictated as the Indian has always been, put on reservations and treated like a child, and only the White Man knows what is best for him."